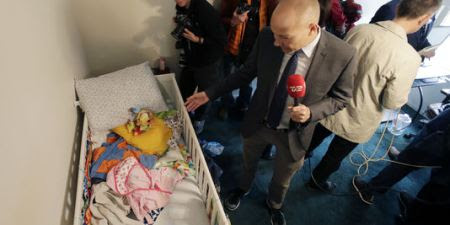 
On Wednesday, Syed Rizwan Farook, 28, and Tashfeen Malik, 29, stormed a holiday party in San Bernardino, California, killing at least 14 people and injuring 21 in the deadliest mass shooting in the US in three years. Hours later, the couple reportedly died in a fire exchange with police.
Malik had pledged allegiance to Abu Bakr al-Baghdadi, the leader of the Daesh (ISIL) terrorist group, three US officials familiar with the investigation claimed on Friday. On Saturday, the Takfiri group also claimed the couple as its followers.
The Federal Bureau of Investigation (FBI) said on Monday the couple had been radicalized "for some time."
Kelley told Press TV on Tuesday that the shooting “is just one in a long string of false flag events that I am afraid to say are not over.”
“We’ll probably be seeing several more before the end of the year, because of the events that are going on in the world, specifically with the NATO being implicated in the buying of oil from Daesh and other events,” he stated.
“So when these things happen they need to have a rapid response which requires a false flag attack. This was very obvious that this was going to happen,” the analyst added.
“The people that were on the scene and saw this happen also reported that three tall white men wearing black shirts, khaki pants and tanned combat boots were actually the shooters. The description is almost exactly what the gentlemen from Craft International, the mercenary organization that was involved in so many other false flags, actually look like. This seems to be their standard uniform,” he noted.
President Barack Obama on Sunday called the California shooting an "act of terrorism” and said the couple who launched the attack "had gone down the dark path of radicalization."
"They had stockpiled assault weapons, ammunition and pipe bombs. So this was an act of terrorism," he claimed.
Kelley said “the people that are being implicated – the couple -- first of all if they were planning something, if they were radicalized as this is being said, and clearly the NSA, the FBI will be right on the top of these people all the time, but rather than stopping them from doing something, they were nurtured to be used for this exact purpose.”
“I do not suspect that these people have anything to do with the actual shooting. I suspect that these were patsies, no different than Timothy McVeigh or any of these other people who have historically been used to implement these terrorist acts,” the commentator said.
“If you look at the people that were wounded you can see clearly that bullet wounds are not real. The .223 weapon or bullets fired from AR15 – an extremely powerful weapon -- would blow someone’s arm off, it is not going to make a small hole,” said Kelley, who is also a weapons expert.
“So clearly this is a very very dirty false flag. Obviously, the United States is getting very very desperate; the government here is very desperate, they need to do something immediately to disarm the United States prior to a revolution, because the people here are waking up very fast, and they are ready to shut down this evil empire. And this needs to happen very soon,” the analyst concluded.
In his televised address from the Oval Office, Obama called for tougher gun controls, starting with a ban on gun purchases for anyone on a US government no-fly list.  "To begin with, Congress should act to make sure no one on a no-fly list is able to buy a gun.”
"What could possibly be the argument for allowing a terrorist suspect to buy a semiautomatic weapon? This is a matter of national security," he stated.
Obama has said the “biggest frustration” of his time in the office has been the inability to reduce unparalleled levels of gun violence in the country.
=====================================================

“It’s not him,” a third San Bernardino shooting witness proclaimed about Sayd Farook and his wife.
The so-called “terror couple” have been accused of masterminding an ISIS terror attack on a Christmas office party where Sayd worked.
Earlier this month, the attorneys for the Farook family maintained that they do not believe the suspects are the ones who carried out the attacks in question.
Several eyewitnesses and family of witnesses and victims initially said that three athletic Caucasian men had been responsible for carrying out the attacks. Police immediately banned them from speaking with the media.
Just days ago, another eye-witness in the office came forward and said that in spite of what the law enforcement and mainstream media narrative is saying, the people who carried out the attack where very athletic, large, Caucasian men, who were three – not two – in number. Farook’s wife, it should be remembered weighed approximately 90lbs.
Now, a third prominent eye-witness, Chirs Nwadike, has stepped up to challenge the mainstream narrative. He recently told reporters he received a phone call from an unknown person around 7 p.m., on the evening of the shooting, who told him that he must say that Sayd Farook was the shooter.
You read that right, he says that he was called and told to change his story and say that Farook carried out the attacks with his wife, even though that is very different than what he witnessed.
Nwadike told reporters:
“No it’s not him [Sayd]. I told them about it. He’s quiet. He doesn’t make any trouble.”
“He was just spraying bullets everywhere,” Nwadike said. But the gunman was not Sayd, or his wife.

Listen to what he has to say and help SPREAD THE WORD!